I would like to inform you that Cartoon festival “Kolagin 2020” has announced the 5th International Cartoon Contest. 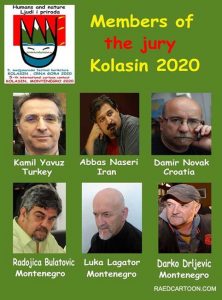 Rules:
CONTEST THEME: Humans and nature and FREE theme .
You can send three works for both themes.
Cartoons can previously be published or rewarded and should be creative, funny and amusing.
Works have to be graphically convenient for printing on T-shirts.
The participants may send a maximum of 3 works to compete.

EXPLANATION OF THE THEME

Man is a part of Nature.
Nature is a part of man.
Without nature, human life is impossible.
The planet Earth is our home to all people and all living beings.
If we disturb harmony in nature, we destroy each living being.
We are witnessing that man is increasingly disturbing and endangering the environment. The main reason for this is money.
Money has become everything to man.
Is money more important than nature, clean air, forests, rivers, lakes and the sea?
Quo vadis, homine?
How to protect ourselves and the nature around us?
How to save ourselves from diseases and pandemics?
How to return to our mother – the blue planet – the Earth?The only planet that gave us all life conditions: natural beauty, food, water, air.Let’s try to send messages and advise the humanity through caricature and humor, how to save our mother – the planet Earth!There is a prejudice about TECHNIQUE AND SIZE : FreeAll entries must be send by post address :Centar za kulturu Kolasin 81210,Crna Gora-Montenegro  -/za medjunarodni festival karikaturelor : e-mail : festivalkarikature@opstinakolasin.me 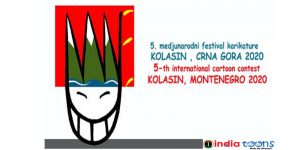 THE DECISION of the jury will be published in the august 25th , on all cartoon websites.
Winners will officially be announced on august 25th of July and the announcement will take place in the Cultural Center in Kolagin.
Award ceremony will be on august , 29th 2020 , at 20h in the Cultural center Kolasin. Festival organizer: Municipality Kolasin, Culture center Kolasin and Ministry of culture of Montenegro

Winners of the 7th World Humor Awards in Italy

Shortlist of the 3rd edition of the European Cartoon Award

Memories from Inaugurationof the International Cartoon Exhibition on Road Safety in Malaysia.